The man is a legend. He successfully supported the greatest metal acts of all time with his down low, rock hard grooves, currently rediscovering his musical calling by fronting a band that bears his own name. We asked Jason Newsted about some details from his musical past.

TopGuitar: It is widely known that apart from playing in Metallica and Voivod, you also had some episodes with Sepultura and Ozzy Osbourne. But many people haven’t heard of your cooperation with Gov’t Mule…

Jason Newsted: We did a little bit of recording on the “The Deep End [vol. 2]” album. There was the idea to get thirteen bass players together to play that one thing. So that’s the studio recording that I did, but I also played some live shows with them, probably 10 or something like that [during which “The Deepest End” live album was recorded]. [It was] a different kind of music for me to play for sure and some really, really talented players, so I was just happy to be included.

TopGuitar: Apart from those big names of the music industry, you played with some less known bands like Flotsam and Jetsam. You recorded the first album with them and you are mentioned in the credits for two other records, but you were not a member of that band when they were made…

Jason Newsted: Right, I wrote most of the “Doomsday [for the Deceiver]” record and then two or three of the tracks that went on to “No Place for Disgrace” record with Flotsam, but I was already in Metallica by that time, so that’s kinda what happened there. Flotsam and Jetsam are still playing, they just released a new record called “Ugly Noise”. Actually I gave them the title to the record and I also helped with some lyrics and arrangements on two or three of their songs.

And what happened with Echobrain?

Jason Newsted: We went out with the first album, then we wrote some of the second album and then a lawsuit in the US ruined that band. There was a band called Echo Drain from Texas that sued Echobrain and that destroyed our band. 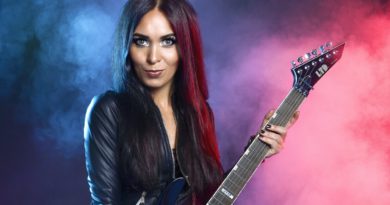 Tosin Abasi about developing his style