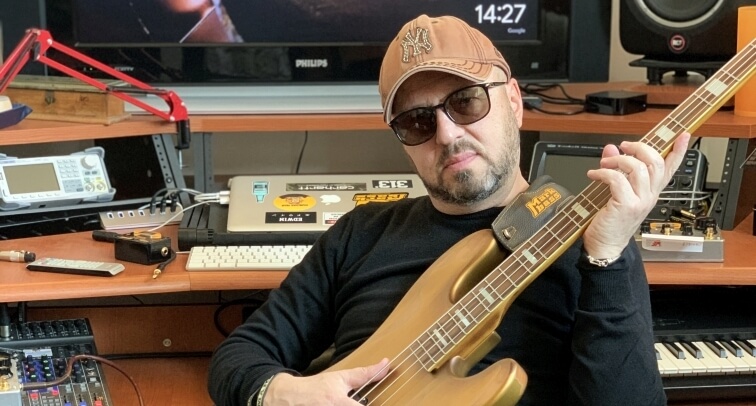 We like interviews like this, where we get to know not only the outside of the interviewee but also the inside. Marco de Virgiliis is such an open, honest and enthusiastic person that we begin to understand where the great success of his brand Markbass comes from. This man has the vision, knowledge, and energy to change the ossified image of a typical music equipment manufacturer. Thanks to such people, our industry is developing and innovative equipment is becoming even more available

Michał Wawrzyniewicz, TopGuitar: Hello Marco, it’s really great to talk to you. First of all I have to ask you how you got through the pandemia personally and as a Markbass boss? How does the lockdown affected Markbass when it comes to its usual action?

Marco de Virgiliis: Hello, It is my pleasure! For me the pandemic period could be divided into three periods: the first one where everyone was so scared, no one was understanding what was happening, what we could do, the second period, I want to call it: REORGANIZATION, because I with all my team searched to find some positive incentives, elements to start again. And the last period, unbelievably, for me is the period of new born, we reorganized the company, new products. Without anticipating too much, I am happy to say we will release some important news at the beginning of 2022, these news will differentiate us from others.

On the occasion of the presentation of the new Gloxy series, the new term ‘glocalisation’ emerged. What does it mean „Glocalisation”?

Marco de Virgiliis: This is a good question, I really care about it. Everyone says we live in a global world but it is not true, the only global thing is the market. With glocalization I mean making the most from our „Local World”. I live in Italy, we have a unique lifestyle using all that creativity everybody acknowledges us, other than the advantages perfectly and harmonically mixed with the relationship network we built worldwide. This is the winning mix for us, that let me develop and design unique instruments with an unbeatable value for money. I decided to take the best from my living in Italy, but also mix in on production and raw materials supplying. Based on the idea of Glocalization I wanted to create not only a product but a different way to conceive production and a way of business and I think I made it with the GV Gloxy Series.

I know that before the world had seen Markbass Gloxy series, it has been tested at italian music shops. What was it for? Did these opinions have affected the Gloxy series? Were they later modified?

Marco de Virgiliis: Yes, we have started launching the Gloxy series in our Italian Markstore, but when the basses arrived at the store I had already done all the tests with my expert collaborators in the headquarters and the results were great! When the basses arrived in the stores, they were ready to be sold, with great results, I received great feedback, they were very happy with this new product. After we have released the GV GLOXY SERIES in Europe, and now they are ready to leave for the USA too, only some months and with our GLOXY Series we will be all around the world.

Let’s talk about Markbass endorsers – group of greatest bass players of the world. How does it feel when you know that all of them love Markbass gear?

Marco de Virgiliis: When I think to my endorsers, I think also to my friends. I like to work with them because together we can improve every product. I really care about their feedback, because working together we can, maybe, find something brand new. When I started, over twenty years now, everybody tried to tell me how I should do but now no more, I am happy because things have changed, I work together, we cooperate and this is very important for me.

What I can see in social media is great friendship between you and endorsers, you hang out together, riding Markbass bike, sharing pics and having fun. It’s like family affair, isn’t it?

Marco de Virgiliis: Absolutely yes! As I said I think they are part of my Markbass family, with all the people who work with me, they are an important part of my team. I can proudly say all of us enjoy our work. I’d like to show my chats with endorsers, are the same chats I have with my friends!

Markbass F1 series basses are made of spruce trees from Val Di Fiemme valley, the same wood was used by famous Antonio Stradivari to his bowed instruments. Could you tell me what was the impulse to take ancient luthiers legacy and adopt it to modern instrument built?

Marco de Virgiliis: This choice has its origin in my particular way of thinking, I am an example of lateral thinking, I used to think out of the box. I am a fan of creativity based on knowledge, it is a form of lateral philosophy based on more creativity and less ties. I have always been fascinated by history, and fascinated by Paganini. I started some tests and I want to introduce something new for the Gloxy series. Fender uses Alder for their instrument because they have alder close to its house… I have Val Di Fiemme wood near my home.

I know that you are introducing a new preamp in which the VLE and VPF filters have been replaced with one Old School filter. What is the main difference between them and in general between the 4th generation of Little Mark amps and the olders?

Marco de Virgiliis: To be honest the name Old School comes from my relationship with Marcus Miller, with this filter can be cut some frequencies, it was not usual with the older amps. Moreover, we changed the frequency range of this filter using the same circuit.

You’ve just launched a brand new Little AG 1000 amplifier, signed by Andrew Gouchè. What’s new in it and what kind of bass players it’s addressed to?

Marco de Virgiliis: Andrew Gouchè is popular all around the world for his particular sound and for his being virtuous, he is an unavoidable presence in the world of gospel; he has worked closely with artists like Prince, Gladys Knight, Julio Iglesias, Snoop Dog and so on, I wouldn’t want to forget anyone, but these are just a few names of his amazing collaborations. When he tried Markbass amps he liked them, but he said to me he desired to have HIS SOUND… We started to work together, understand what he loves. I followed his advice and in the end I am happy we found the sound, his sound, he is happy, I think it can be also noted through his words, his posts, his fans are happy, but for true we are all glad.

We also ought to talk about Markbass strings, some series are unobvious and innovative. Could you tell me what’s rare in new Balanced, Ultimate and Advanced Soft Touch series? What about new Andrew Gouchè strings?

Marco de Virgiliis: We decided to start this new adventure with the strings respecting the ancient tradition of master string makers. We have gained the D’Orazio Strings company, famous for making strings since 1859, from that moment I with Alessandro Ciavattone, before part of D’Orazio Strings and now head of Mark strings department and specialist of strings, have decided to make something brand new. If I’m being honest this road has already been taken by them. Talking with Alessandro, I realized the product enthused me! And thanks to this collaboration were born Longevo strings, unique strings made with nano-techology , I like to say Longevo series is the result of the match of: Master’s Artistry and know how linked with Markbass’ attitude to innovate. These strings can be used also by people allergic to nickel, thanks to the microfilm, but I can guarantee the sound has remained the same! Talking about the Balance series, it was born in collaboration with Paolo Costa, after weeks of work. I should say, objectively, when fitting these strings the sound is different. About the new release: Gouchè Series we always made the same work, we love to work with the endorser in the best way so we talked with Andrew Gouchè, understanding what was his purpose for this product and we realized something absolutely new.

May I ask you about Markbass plans, especially regarding general directions of development and evolutions. And – I almost forgot – what about DV Mark? Should we expect some hot new products?

Marco de Virgiliis: About this topic I can only say: Markbass will surprise you, but I can’t add more, because we are still working on it. As I said during the last period staying at home for the covid, bring me to reflect, searching for a new way to go, find something new that could be more appealing for the customers… but we will talk again about it at the begin of 2022, be ready!

Many thanks for Your time & stay healthy!

Marco de Virgiliis: Thanks for this kind talk! Stay safe! 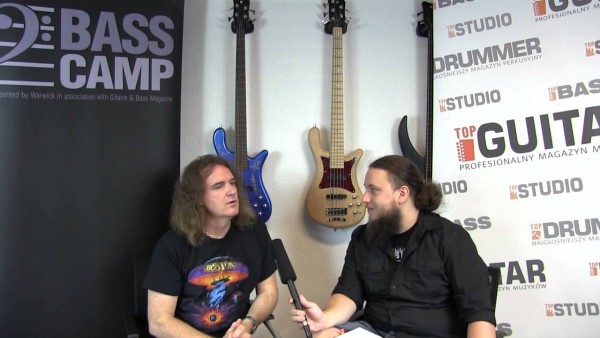