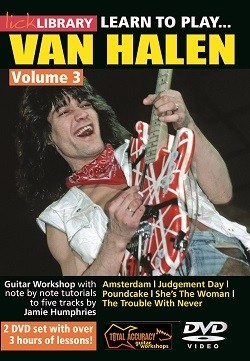 LickLibrary has just launched Learn To Play Van Halen, Vol. 3 (RRP £24.99) following the demand for it’s successful Van Halen volumes 1 and 2. With over three hours of guitar lessons, this double DVD set contains a new selection of tracks giving step-by-step lessons on how to play like Eddie Van Halen, voted the greatest guitarist of all time in 2012 by a Guitar World poll.

Andy James, the highly focused and uncompromising guitarist with Scared Mother Tongue, takes you through Amsterdam with a drop D tuning, the intense Judgement Day opening with Eddie’s solo and huge whammy bar dive bomb, the melodic chorus and powerful solo of The Trouble With Never and the infamous Poundcake, with its cool power drill riffs. Then, making a guest appearance is Brian May’s sideman, Jamie Humphries. He walks you through She’s The Woman from their 2012 album A Different Kind of Truth, with its rich seventies feel.

With these two highly skilled guitar teachers, guitarists can learn trademark Eddie Van Halen solos techniques and killer riffs. This DVD offers an in-depth look at bending and tapping harmonics plus how to use a drill in the middle of a solo. The DVD is full of amazing licks, groundbreaking soloing techniques and jaw dropping riffs that defined Eddie Van Halen as one of the greatest guitarists of all time!

Learn To Play Van Halen, Vol.3 is available to purchase from www.LickLibrary.com along with all the other Van Halen guitar tuition resources including Learn To Play Vol.1 & 2 and Quick Licks Vol. 1 & 2.

Guitar Camp at Musikmesse 2017: running order available as from today