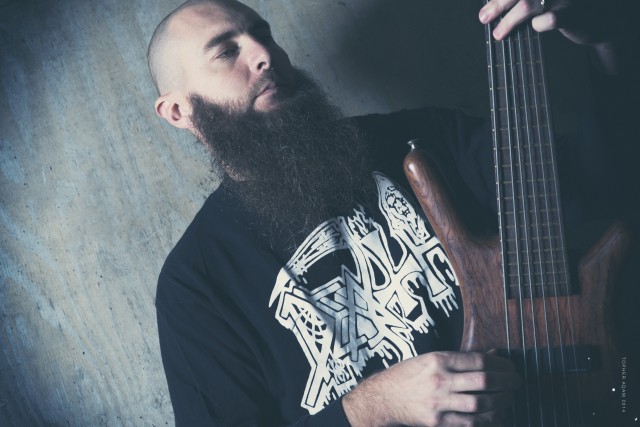 Six Feet Under bassist Jeff Hughell announces his debut full-length solo album Chaos Labyrinth showcasing his unique skills as a preeminent bass guitar player. His technical metal roots shine through on tracks such as “Jagermeister Death Grind” and “Chaotic Implosion”, yet exceptional versatility is shown through calmer melodic songs such as “Still” and “Let It Go”.  The album is an embodiment of all that can be done on a bass from awe-inspiring tapping to beautifully flowing melodies. Chaos Labyrinth is now available on ITunes and Amazon.

“Chaos Labyrinth is different because it’s a whole new level of sounds and dynamics from anything I have ever done” says Hughell. The album is composed of ten songs and is 43 minutes long. It succeeds a solo EP I Came To Hate that was released in 2009. Chaos Labyrinth was recorded at Castle Ultimate Studios by Zack Ohren. Artwork was done by Shaun McInnis, and photos by Jason Anaya at Anaya Photography.

Hughell brought in many guest artists to collaborate with on the album. The title track alone features bass solos from Steve Di Giorgio (Death), Sean Martinez (Rings of Saturn), and Alex Webster (Cannibal Corpse) as well as a guitar solo by Nick Avalonitas, drums by Alex Bent (Arkaik), and keyboard by Marc Gilson. The rest of the album also features bassist Brian Wood (Cyanic), guitarists Tyler Lane, Matt Sotelo (Decript Birth), Ola Englund (Six Feet Under), and drummer Kevin Talley (Feared). Hughell even shows off his own skills on the piano on “Dreams of Chaos”. The combination of all these musicians led by Hughell resulted in a truly special recording.

Hughell is a renowned 7 string bass player who is well established in the technical metal scene. Bands he has played with include; Six Feet Under, Reciprocal, Feared, Brain Drill, Vile, Osmium, Severed Savior, Asylum, Rings of Saturn, and Cryptoreum. He is endorsed by Warwick, Gallien Krueger, Seymour Duncan, and Dean Markley.

Get the sound of Arctic Monkeys’ Alex Turner